Sam Cohen of IHRB did not think twice before telling porkies to the NSW Government’s Office of Fair Trading. It’s bad enough that he lied to me about his so-called hair regrowth treatment. But to blatantly lie to a government department, shows his colours in full bloom. I had complained about his deceptive conduct to the Office of Fair Trading. A case-officer telephoned Sam Cohen about his hair loss treatment, asking him, on my behalf, for a refund, in accordance with his 100% money-back guarantee that he plasters across all his ads, documents, contracts, and website. Before I explain how Sam Cohen exposed himself, let us read an excerpt from the letter that I received from the case officer (click here for a copy) [1]. It said:

I refer to your correspondence dated 1 September 2009 regarding Institute of Hair Regrowth & Beauty Pty Ltd.

Your concerns were brought to the attention of Sam Cohen… who advised that they guarantee some (not all) hair re-growth. Mr Cohen states that some regrowth has occurred so far. However, to maximise the regrowth they recommend the treatment continue up to 3 years.

Mr Cohen also states that he has never claimed to be a practitioner, thereby refers the patient to their doctor to obtain certain medication to assist with the regrowth.

As such Mr Cohen is not willing to provide a refund.

In cases such as this, the Office of fair Trading attempts to assist the parties to negotiate a satisfactory resolution, however, it is not empowered to direct a trader to a particular course of action…

Lie 1: that IHRB guarantees some (not all) hair re-growth

This is false on so many counts, I hardly know where to begin. The ads mislead consumers about a supposed guarantee. However, Sam Cohen makes his clients sign their name on each photo to say that they do not expect any hair to grow in the areas where the clients expect hair to re-grow. So in fact, from what I have experienced, there is no guarantee. In my opinion, it is a lie. It is a deception. It is a scam. From what I have seen, it is brazen, unethical, daylight robbery. So he is lying to the Office of Fair Trading by suggesting that he offers a guarantee. There is no guarantee. Then he complicates the matter by saying that he guarantees some, not all, hair re-growth. A complete red herring to the whole affair. This is his way of making out that the client is unreasonable. He gains sympathy from a third party, who might understand that ‘some clients expect miracles’, as he put it to me. A reasonable person would sympathise with Sam Cohen who says that surely it is good enough to promise some, not all hair re-growth.

This is problematic on many fronts. First, when I protested to Sam about his contract (which he tried to void after I had paid him (Click here [2])), he varied it for me. Sam signed an amendment that said that I can expect a noticeable improvement within twelve months, or I would receive a full refund. Indeed, after twelve months, it was noticeable that my hair condition had worsened! Therefore, he can hardly say that I had gained some hair. I gained no hair. I lost more hair under his treatment because he had not told me that a side-effect of his hair re-growth formula is… wait for it… hair loss! Minoxidil can cause hair loss!

The second problem is that he shows his clients the wildest of photos, featuring the most amazing transformations. At the same time, he says that he has never failed… That he has never had to issue a refund… That his treatment works in 130% of cases (amazing mathematics). So, with the odds stacked in favour of his miracle treatment, how can he now soften his tone by saying that customers are unreasonable. He is the one who says that he and his products had never failed. He is the one who shows us a stream of amazing photos. Yet, he never tells us what those clients are taking (many are taking dangerous drugs that are not approved by the TGA! (Click here [3])). He never tells us how long the patients had been on those other drugs. He never tells us that some people in the photos are not clients, but models! He never tells us what it costs them for those added drugs. He never tells us about the side-effects which include a range of ghastly and painful rashes, bruising, tenderness, hair loss, and unsightly hair growth on any part of the body! (click here) [4] And he never tells us where these people are now and what their scalp looks like, or that the moment they stop taking these unapproved drugs, their hair will fall out. Much is left unsaid. He just lures people, then cons them, traps them, and when they expect a refund, as I did, he says that I should not expect anything more than ‘some’ hair growth. I saw NO hair growth, Mr Cohen. Yet these photos show amazing hair growth. There is a large gap between ‘some’ hair, and ‘amazing’ hair.

Here is an example of the photos he showed me (and which he plasters all over his full page advertisements and his web site). When we see such transformations, and he tells us that he has a secret formula comprising Indian Curries, that only he knows about, what does he expect us to think? These examples are what he says he can do for us. He does not say that some people do not see any improvement. He says that ALL his clients see this type of improvement. Even people he had refused to treat, who begged him to treat them, saw this kind of result (that’s where he gets the 130% success rate). And when he makes out that he has been in the industry for decades, saying that he has innovated and developed solutions to hair loss, how can he have the hide to say that the customer should only expect ‘some’ re-growth, when in my case, I received NONE whatsoever! What a hide! What a cheek! Unbelievable brainpower. 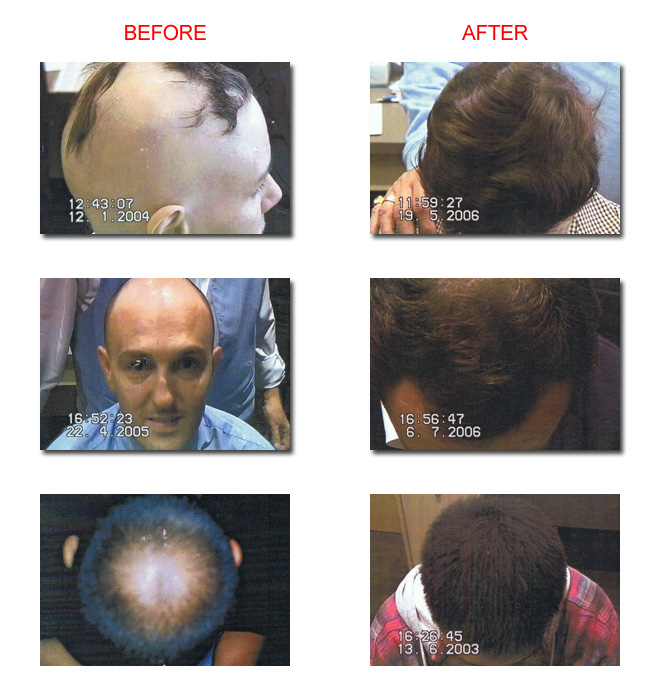 Lie 2: that some regrowth had occurred

Sam Cohen told the Office of Fair Trading that I had benefited from some hair growth. A pathetic lie. A convenient thing to say to a case-officer over the phone. He can’t prove it, and the case-officer can’t argue the point. What a waste of time. The Department of Commerce runs the Office of Fair Trading for the benefit of consumers and traders. Yet, I fail to see how it can be effective if it cannot challenge the diatribe and the lies that no doubt are spun from the likes of Sam Cohen. Sam thinks that he has photographic evidence. He uses fuzzy out-of-focus images when it suits him, as he did with my final photo, which he would not re-shoot. Too bad for him that I, too, have photographic evidence.

Lie 3: that Mr Cohen has never claimed to be a practitioner

Hogwash. He tells everyone that he is the man. He is the innovator. He is the genius behind the secret Indian Curries. Sure, he never says, ‘I am a doctor’. He simply insults every doctor that has ever lived. Of course no-one thinks that he ever said that he is a doctor. But he does say that he has been in the business for over 35 years, and that he has innovated and developed these Indian Curries. As far as the client is concerned, he is the man behind the formula. He is the innovator. He is the saviour who puts all doctors to shame and he is the one who has the method and the topical solution and the special shampoo. All his bottles have his company name on them! He and his company are one entity! So when his formula does not work, he tells the government that he has nothing to do with it because he is not my practitioner? Where does he get off?

Lie 4: that he refers the patient to their doctor to obtain medication

What’s that supposed to mean? He did refer me to my doctor. My doctor sent me to a specialist. They both advised me against the IHRB method. My doctors did not treat me. They did not prescribe medication. They did not provide the solution. Mr Sam Cohen of IHRB provided all my products, including the shampoos, tablets, and topical Minoxidil, all without a prescription. All outside the laws of the State of NSW. It was he, not my doctor, who treated my head. So now he wants to blame my doctor? I can’t understand such lies that sound fabulous from a distance, but utterly disgraceful when you know the truth.

Sam Cohen said that he is not prepared to provide a refund because I had ‘some’ hair growth? I had none. If he will insist that I had some, can he please count them? Were they five strands or fifty strands? Even if they were, does he have a count? Did he ever count anything? He relies on fuzzy photos. And even if he can point to one or two that grew, is he also counting the hundreds that were lost? God gives me one or two strands, and he wants the credit for them, but when his formula causes hundreds of strands to fall out, he wants to blame my doctor who had nothing to do with this? He wanted my doctor to prescribe dangerous products that are not approved by the TGA. He wanted me to risk heart failure and impotence and more rashes and sore spots. From what I witnessed, it was a scam. Anyway, I told Sam that I will not be taking that other risky stuff, and he said that it was okay. He said that his formula alone is fine. Poppycock!

Lie 5: that the treatment must continue for three years

His money-back guarantee says that we expect to see the regrowth within 12 months. That was the deal. He cannot pull figures out of thin air. He seams to pull lots of things out of thin air, like his Indian Curries which three of his pharmacists confirm do not exist.

In one single short conversation with the Department of Fair Trading, Sam Cohen misled the case-officer and lied about five out of five items. And confused the issue. Wow. How would he go inside a courtroom under cross examination?